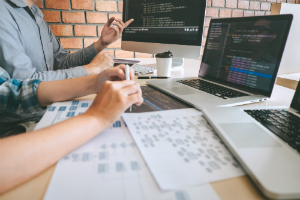 Outsourcing software development projects have been a strategic and central issue for most businesses due to the oftentimes complex process of hiring new talent. We all know that acquiring new software developers in the United States can be difficult, expensive, and time-consuming. Even if you find the best person for the job, it usually takes a lot of effort to keep them motivated and working for your company.

Although many organizations prefer to have an in-house software development team, lack of resources and the product roadmap end up pushing them to partner with an outsourcing company at some point. This often happens during a critical situation and the startup decides to go with a firm that someone referred, or simply with the service provider who sent a cold email at the perfect time.

Nearshoring is when a team is based geographically close to a company’s headquarters. Typically, they are in the same region or time zone. A company in the United States outsourcing to one in Colombia is one such example of nearshoring.

Here are 8 reasons why nearshoring software development is a great idea:

Selecting the right outsourcing team for your software development project from within the same union means the legislation is also the same. This also increases accountability, making them a better choice compared to offshore teams.

Do remember that international law can be a bit tricky. Without a detailed agreement in place, it may be harder to pursue modifications and solutions might be unclear. Staying within the same legal borders offers protection not only for you but also for your outsourcing partner.

When you are based in the United States, it is evident that the nearshoring partner you hire should be within North American bounds. Therefore, the first direct advantage you can expect is economical.

Since money gets injected into the same area of trade, it will remain in the region’s circulation. This helps benefit all parties who are based within the area–creating a win-win situation as you continue the project. Creating jobs for businesses and paying your taxes there helps boost the local economy and makes sure that it thrives, too.

Because you are paying for high-quality service, choosing local also means you are getting the value of what you paid for.

Would you be pleased if your development team decides to take a long break during your working hours? That may be fine if you are flexible but try to consider the different work ethics and culture. Do these developers deliver work on time or do they tend to take long or procrastinate before getting things done?

A lot of nearshore countries have friendly ties with the United States. Because of the prominence of tourism and trade between the two nations, there is a greater familiarity with each other’s language and culture, lessening a chance of any kind of barrier.

Shared language, enough knowledge, and a similar time zone mean it’s easier for you to be in full control and involved in your development project. You need to work with developers who are close, who can easily and fluently communicate with you, and who are available during your scheduled working hours.

Only a few outsourced software development teams can work by themselves, without any face-to-face contact with the hiring company. Visitations and meetings in any kind of project are bound to happen, and sending staff across the globe can be exhausting and expensive.

Aside from the money you spend on the travel expenses, you also lose money in lost productivity from tired employees.

The good thing about nearshore software development is that most U.S. airports have direct flights to the best nearshore locations. Rather than spending a day or two on a plane, travel only takes a few hours if you need to conduct face-to-face meetings.

Having an outsourced staff working on the other side of the world means shifting all business processes to do with that team to late evenings or early mornings.

This means having as much as a 12-hour gap between meetings with members of the team. It also equates to a huge productivity cut in the project. If any issue arises offshore and the team needs to consult someone at the main headquarters, they have to wait for several hours before getting anything done.

One of the reasons why most companies prefer offshoring is low costs. Of course, cost efficiency is a major deciding factor when choosing between the two outsourcing options but is it really price over quality for you? It’s worth noting that software development is not something you'd want done at the cheapest price possible. You might end up paying more later if the software requires improving and fixing once it’s completed.

At the end of the day, your success in outsourced software development all boils down to the value of your human connections. It also relies on mutual trust and commitment instilled by both sides. That’s why these connections should be where you channel a large part of your resources and energy. Also, thanks to the values of cultural sameness, proximity, and cost, nearshoring lets those resources even go further.

>>> Knowing the benefits of nearshoring is just a tiny piece of the puzzle. Next is knowing how to pick the right nearshoring partner. Click here for tips! <<<

When it comes to increasing productivity and saving cost on projects, outsourcing can be an ideal option for any business. Nearshore software development has grown increasingly popular these days and it’s no surprise why.

Technological improvements in the past few years have made it possible for companies of all types–not just tech firms–to take advantage of the lowered cost of both nearshore and offshore development teams. By learning the benefits of nearshore software development, businesses can weigh their options and choose the outsourcing practice best suited to their project.