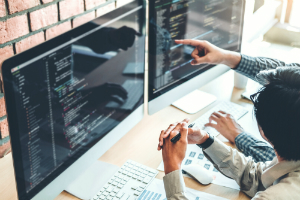 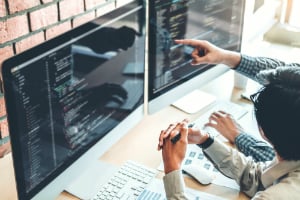 Based on the cosmological theory of the same name, the Big Bang is one of the simplest methodologies in the system development life cycle. It is designed around the notion that starting from nothing, fast growth, and expansion of code will emerge—creating a finished software product in an instant.

Although the Big Bang model has excessively simple tenets, the use of this SDLC model should not be ignored. In fact, it has the potential to be a powerful tool that can manage the SDLC of a diverse array of projects.

The Big Bang Model: An Overview

The Big Bang methodology prioritizes all possible resources in the coding and software development process with little to no planning. Needs are understood as the process moves forward. Any required changes may or may not need to improve the complete software.

This model is recommended for projects of a smaller scale, such as teams with just one or two software developers on board. It is also ideal for academic or practice projects that do not necessitate planning. It would work well for a product that has no well-defined requirements at the beginning of the development, or that has no final release date.

Product deployment or release is one of the most crucial steps in the system development life cycle.

While many teams will go for a traditional, incremental rollout when deploying new software, there are instances when introducing a system slowly is infeasible. This is particularly true when designing a dramatically revamped version of a product.

During such cases, the only logical solution is a deployment that takes place promptly, like the flip of a switch. This scenario is often referred to as “Big Bang adoption” when all users of an existing system are moved to a new one at a set time and date.

As one would expect, system implementation through Big Bang deployment comes with a lot of risks. Unforeseen problems, in most cases, can lead to failures or quirks in the system when migrating information from an older version.

Pros of the Big Bang Model 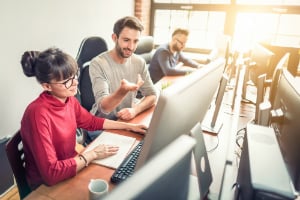 No Need for Extensive Planning

Perhaps the best advantage you can enjoy from the Big Bang model is the ability to begin coding immediately. There’s no need to write out documents or requirements because developers can simply sit down and start creating the code. This allows the team to come up with something functional and tangible in a short period, which can be suitable for projects that necessitate an output right away.

The Big Bang model works particularly well for introducing newcomers to the main pillars of software development. It enables them to get right into the code and prioritize development aspects without being slowed down by the mundane tasks involved in many SDLC models such as testing, documentation, and so on.

Since there are no formal requirements or documentation planning, there is also no need for managerial staff. Most Big Bang model projects involve team members who are peers, with no formal hierarchy in the management.

Because almost everyone involved in the project is likely a developer, a Big Bang model works best at honing the skills of full-stack or multi-disciplined developers. These professionals can work with a vast array of technologies, and the model can help expand their knowledge.

Considering the chaos involved in implementing a project from a Big Bang model, it should be expected that the kind of application which suits this model best is that of a smaller scale. The Big Bang model is actually common in the industry, whether developers acknowledge they are using it or not. This model shines during Hackathons, which refers to organized events where collaborators gather for a few days to quickly develop functional software.

Cons of the Big Bang Model

Not Ideal for Complex Projects

The Big Bang model works relatively well with smaller teams and projects, but it can be catastrophic for long-term and bigger projects. Even if nothing goes wrong on a lengthy project, problems could happen along the way because of the lack of planning. This would almost always end up with hours, if not days of alterations and refactoring to existing components. In the worst-case scenario, the entire system could crash.

It goes without saying that solely relying on the Big Bang model for simple projects involves highly dangerous risks. When there is no formal leadership, standard coding practices, and proper planning, there’s a bigger chance of facing potentially serious issues once you’re already deep into the project. These problems may require a total rewrite of code base up to that time.

From the get-go, the Big Bang model is about as cheap a model as it gets. However, it’s not something without serious risks, which can lead it to unintentionally turn into one of the most expensive SDLC methodologies in the long run. The initial budget will be spent on a whim to get things going, and the absence of a proper plan can spiral out of control in an instant once the project requirements dramatically change.

Choosing a System Development Life Cycle Model for Your Project

Whether you have a preferred type of system development life cycle model or not, you need to understand the value of choosing the right model for your software project.

Many SDLC methodologies do not adhere to particular procedures and phases. There are models where development begins with the workforce or efforts as the input, while the software product is set as the output.

The Big Bang is one type of development model that does not follow a specific protocol, which means that it does not demand extensive planning. If the client is not sure about the requirements for the development or implementation has to be conducted on the fly, the Big Bang model is the best choice.